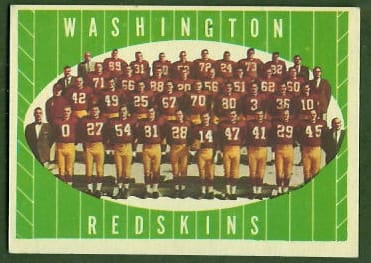 Only the Dallas Cowboys saved the Washington Redskins from complete disaster in 1961, the last year they fielded an all-white team.

The Washington football franchise, under first-year coach Bill McPeak, posted a 1-12-1 record, the worst showing in Redskins’ history, in their first season in the new DC Stadium (later RFK) on East Capitol Street. The lone victory and the tie both came against Dallas. The Cowboys , new to the NFL, were the league doormats in those days, certainly not the ‘hated’ rivals of later years.

With the Redskins losing their final eight games this season to finish 3-13, ’61 is back in the news as the team’s all-time low point. That year Washington lost its first nine games after losing the final eight in 1960 to run its winless streak to 17 before finally managing to tie Dallas 28-28 on Nov. 19. The Redskins then beat the Cowboys, 34-24, in their final game of the year at RFK. Rookie Norm Snead, later traded for Sonny Jurgensen, was the starting quarterback in 1961.

But off-the-field, where the biggest news took place, ’61 was a landmark year by any measure.

By then, the Redskins were the only NFL team without a black player on their roster. Moreover, tight-fisted (and overtly racist) owner George Preston Marshall had never considered signing a black player in the 25 years since he bought the old Boston Braves and moved them to the nation’s capital in 1937.

Marshall had aggressively promoted his team throughout the Deep South via a TV deal in 1950 with the American Oil Company (Amoco) to televise all games throughout the region. Remember too: the original version of ‘Hail to Redskins’ written by Marshall’s wife and 1920’s silent screen star Corinne Griffith, contained the line “Fight for Old Dixie”… later changed to ‘Fight for Old DC.”

Marshall was defiant whenever the question of integration was raised. “We’ll start signing Negroes when the Harlem Globetrotters start signing whites,” he said at one point.

But powerful forces were at work behind the scenes that would soon bring dramatic change. John F. Kennedy had been elected president in November, 1960. In ‘61 the power of the federal government, coupled with Marshall’s desire to play in a brand new facility with about 20,000 more seats than the old Griffith Stadium would end the ‘whites only’ days for the ‘Skins.

The story is compellingly told by Thomas G. Smith in his book Showdown: JFK and the Integration of the Washington Redskins published two years ago.
In a nutshell, the new Kennedy administration and especially Interior Secretary Stewart Udall sent a blunt message to Marshall: If you want to play in the new stadium built on federal land, you must follow the law of the land and integrate the team.

As Smith notes in his book, Udall forced the integration of the team on his own without consulting the new president or his brother Attorney-General Robert Kennedy. Udall later wrote that he moved against what he called “the Washington Paleskins “to force Marshall’s hand” on the color ban. Interior Department lawyers pointed out that the team had signed a 30-year lease to play in DC Stadium starting in October, 1961. The stadium was financed with public funds and located on federal land within the National Capital Parks system.

As the “landlord” Interior could deny use of the facility to anyone practicing discriminatory hiring practices, Smith wrote.

On Dec. 4, 1960, the Redskins drafted Syracuse running back Ernie Davis, the first black to win the Heisman Trophy as their No. 1 pick in the NFL draft. In a “secret” deal, disclosed two weeks later, Marshall then traded Davis to the Cleveland Browns for halfback Bobby Mitchell, already one of the NFL’s brightest stars, and Leroy Jackson, the Browns’ No. l draft pick. The color line was finally broken and Mitchell went on to a Hall of Fame career with the ‘Skins.

There were three black players on the 1962 team — Mitchell, Jackson and Pro Bowl guard John Nisby obtained from the Pittsburgh Steelers. The Redskins finished that season 5-7-2 , their best record in five years.

In his first game in Washington in 1962, Mitchell returned a kickoff 92 yards for a touchdown… against the Cowboys. He led the NFL that season with 11 TD’s, catching 72 passes and had 1,384 yards rushing.