This post went up at exactly 8 a.m. this morning local time, which is twelve noon Greenwich Mean Time. Exactly 100 years ago at this very moment, on April 12th, 1912, the Titanic set off from Southampton, England, on her tragic maiden voyage across the Atlantic Ocean. On the luxury liner was prominent Washington resident and presidential aide, Major Archibald Butt.

Archibald Willingham Butt was a successful and well-known military aide to presidents Roosevelt and Taft. He was fiercely loyal to both men and near the end of Taft’s term in 1912, it was clear that Roosevelt was disgruntled with Taft and would run against him. Major Butt was caught in the middle with equal but divided loyalties.

Under great stress, partly attributed to his grueling schedule as Taft’s presidential aide, his health was deteriorating. Major Butt’s dear friend, prominent artist and secretary of the American Academy in Rome, Frank Millet, had pleaded with him to go to Europe with him for a rest. Millet also personally pressured President Taft to permit his favorite aide to cross the Atlantic for a much needed vacation.

Major Butt would frequently serve as Taft’s golfing companion or join him on walks near the White House for exercise. The President was quite fond of his aide and had the highest opinion of the major, making it difficult to go for an extended period of time without his assistance.

The chief trait of Archie Butt’s character was loyalty to his ideals, his cloth, and his friends. His character was a simple one in the sense that he was incapable of intrigue or insincerity. He was gentle and considerate to every one, high and low. He never lost, under any conditions, his sense of proper regard for what he considered the respect due to constituted authority. The president demurred, but eventually relented and granted Butt an extended leave of absence to recuperate. In early March, Butt set sail for Europe with his travel companion, Millet. The upcoming departure was reported in the Washington Post on March 1st, 1912.

“I have not had a leave of absense [sic] since I entered the army,” Maj. Archibald Butt, personal aid to President Taft, declared last night after he had been granted leave to make a trip to Europe. “I have not been well since I contracted toxine poisoning while on a Western trip with the President last fall, but my real trouble is that I need rest.”

Maj. Butt was granted leave of a month and 24 days by the War Department with permission to go beyond the seas. With Frank Mallet [sic] a member of the fine art commission and head of the American Academy of Arts at Tome, he will sail at 11 o’clock tomorrow morning from Hoboken on the steamship Berlin, of the North German Lloyd line, for Naples.

He will also go to Genoa, and probably to Rome and Paris. The President’s aid has several relatives living on the continent, and a brother, Edward H. Butt, in England. These relatives have planned a small family reunion at Paris, and Maj. Butt announced that he hoped to attend.

Maj. Butt laughingly denied his rest trip is to prepare him for a strenuous political campaign. “I do not know that President Taft is planning any strenuous campaign trips,” he said, “but if he does, I shall be prepared to accompany him wherever he may go.”

“I should have taken this rest before, but I wanted to be at the White House during the winter season., The season now is over, and there is very little going on there officially. Consequently, I could best be spared at this time.”

Maj. Butt will return by way of Naples about Easter Monday. During his absense no one will be detailed specially to perform his duties, but all of the younger aids [sic] at the White House will have an opportunity to fill the position. “No Damon and Pythias friendship could have been closer than the friendship of Maj. Butt and Millet,” said Mr. Waltrous, “The two kept quarters together and were inseparable when both were in Washington. They lived near the Metropolitan Club, Butt being, as is well known, a bachelor, and Mr. Millet’s family being quartered at his home in England.” On April 10th, 1912, Major Butt boarded a train at King’s Cross station in London, bound for Titanic’s berth in Southampton. He arrived early that morning and boarded the ship at 9 a.m with first class ticket number 113050.

Titanic departed from Southampton around noon and set out for the 77-mile journey across the English Channel to France. She arrived at Cherbourg early that evening, set to take on 274 more passengers (24 fortunate souls had the final destination of France and disembarked). Frank Millet was reunited with his companion Butt as he boarded the ship with ticket number 13509 and the two settled in for their transatlantic journey home.

The ship weighed anchor around 8 p.m. and steamed to her final port, Queenstown, Ireland. This would be Titanic’s last stop before heading out across the Atlantic Ocean. The first few days of the journey were uneventful, with Butt and Millet enjoying luxurious accommodations of the massive ship. Four days into the voyage, the Titanic struck an iceberg on the starboard side and so began the tragic end for the ship and 1,514 unlucky passengers.

There were numerous sensationalized accounts of Major Butt’s whereabouts and actions in the final hours of the sinking, but largely they remain unverified. The last verified sighting of Archibald was the account below of Archibald Gracie, where Butt was last seen relaxing in the smoking room as the ship went down.

Gracie was a fellow passenger on Titanic and he testified shortly after the accident to a Senate Commerce subcommittee, chaired by Senator William A. Smith of Michigan. The hearings were initially held at the Waldorf-Astoria in New York, but were later moved back to Washington, to the new caucus room of the Russell Senate Office Building (the first hearing ever held in that room).

Just prior to this time I had passed through A deck, or perhaps it was about this same time. Just about the time we were ordered to take the boats, I passed through the A deck, going from the stern toward the bow. I saw four gentlemen all alone in the smoking room, whom I recognized as Mr. Millet, Mr. Moore, and Mr. Butt, and a fourth gentleman was there with them whom I did no know, but who I afterwards ascertained to have been Mr. Ryerson. They seemed to be absolutely intent upon what they were doing, and disregarding anything about what was going on on the decks outside.

After the sinking, Millet’s body was recovered by the crew of the MacKay Bennett. He was still wearing a light overcoat, black pants and gray jacket, dressed in formal evening clothes. In his pockets were a gold watch and chain with the initials “F.D.M.” engraved in it, glasses, two gold studs, a silver tablet bottles, a pocketbook and £2 10s in gold and 8s in silver.

Archibald Butt went down with the ship and his body was never recovered. One of many tributes to the deceased presidential aide-de-camp was held in the major’s hometown of Augusta, Georgia on May 2nd. The visibly distraught and mourning president paid tribute to his fallen aide in front of a large local crowd.

The President was visibly affected by the tributes paid to Maj. Butt. There were tears in his eyes as he called up memories of the man who was his aid [sic] ever since he entered the White House, and who had traveled thousands of miles with him.

Mr. Taft made only a short address, but he came near breaking down twice.

“Never did I know how much he was to me until he was dead,” said the President. “Lacking nothing of self-respect and giving up nothing he owed to himself, he conducted himself with a singleness of purpose and to the happiness and comfort of the President, who was his chief. To many fine qualities he added loyalty, and when he became one of my family he was as a son or a brother.”

Mr. Taft told how he met Maj. Butt, first in the Philippines and later as aid to President Roosevelt. He dwelt on Maj. Butt’s devotion to Mr. Roosevelt and himself.

“It has always seemed to me,” said the President, “that Archie never married because he loved his mother so. The greatest sorrow of his life was when she left him.

Mr. Taft concluded with a word more as to Maj. Butt’s spirit of self-sacrifice.

“Self-sacrifice,” he said, “had become part of his nature. If Archie could have selected his time to die he would have taken the one God gave him.” In 1913, friends of Archibald Butt and Francis Millet raised enough money and, with the authorization of Congress, erected a fountain to honor the companions. Inscribed around the monument are the following words:

THIS MONUMENT HAS BEEN ERECTED BY THEIR FRIENDS WITH
THE SANCTION OF CONGRESS IN MEMORY OF
FRANCIS DAVIS MILLET 1846-1912 AND
ARCHIBALD WILLIAM BUTT 1865-1912. 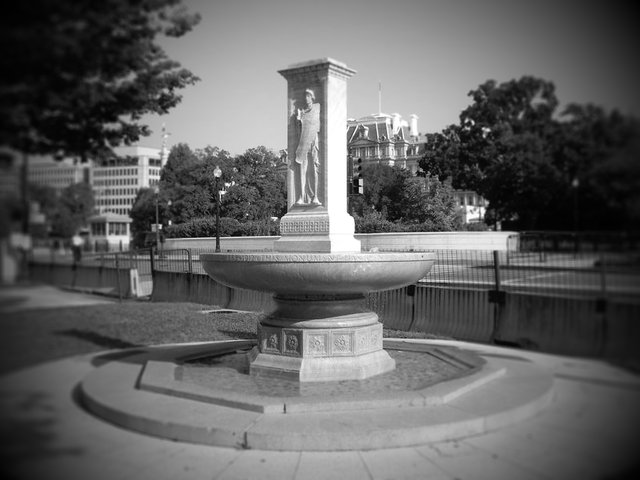 Butt-Millet Memorial Fountain on the Ellipse

UPDATE: I found this great photo on Shorpy, showing newsboys selling papers late into the night with news (or lack of news) on the Titanic and the city’s beloved Archie Butt.