Why Is It Named LeDroit Park?

LeDroit Park was established as one of the first suburbs of Washington, D.C. It was named for a family member of the founders Amzi Barber.
-ad 188-
-ad 615-

Well, you might not know this, but there really was a Mr. LeDroit … sort of.

LeDroit Park was established as one of the first suburbs of Washington, D.C. That’s kind of hard to believe right, since today’s suburbs are Manassas, Ashburn, and Rockville. Anyway, it began life in 1873 when it was founded by Amzi Barber, a former teacher who abandoned education to become a successful businessman.

Barber marketed the development as a quaint neighborhood with clean, narrow tree-lined streets away from the nasty, muddy areas of downtown Washington and dangerous dens of vice like Murder Bay or Swampoodle. He purchased the land from the university, approximately 40 acres, for $50,000 with his brother-in-law, Andrew Langdon.

He served on the board of trustees of the recently founded Howard University, but hypocritically, the neighborhood was exclusively whites-only, having a surrounding gate erected to promote security for those that lived there. Ultimately, in July 1888, the fences were torn down by protesting students from Howard.

So, why how did the neighborhood get its name? Amzi named the area after his father-in-law, J. LeDroict Langdon. No, that’s not a typo … there was a ‘c’ in there, but that was dropped to give it a more of a French look, LeDroit Park. Langdon was also a very successful local real estate.

If you don’t know anything about Amzi Barber, you should know that he was known as “The Asphault King.” Below are photos of his sweet house, formerly located at 14th and Clifton. 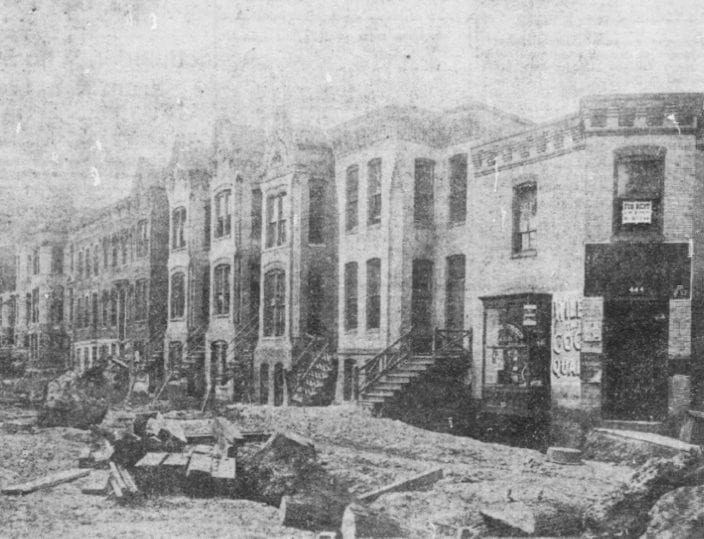 Irish Thief and Family Arrested in Swampoodle for Assaulting Officers