Here’s an old boot advertisement from the Washington Times. It ran in the June 23rd, 1919 edition. These were sold by Hahn’s, which had four stores in Washington at the time.

Genuine Buckskin, as you know, is the best-wearing material known for footwear; soft, cool, comfortable; it will retain life and looks three to five times as long as any leather.

I did not know that. Now, I really want a pair.

Likewise, Buckskin is very scarce at present; in that consideration, the prices on these shoes are extremely moderate.

I also did not know we were having a deer shortage in the 1910s, but thankfully these are priced competitively.

Also, novelty socks for 19 cents? I know a couple of friends that would die to get their hands on socks in colors, in color combinations; regular and three-quarter lengths, stripes and plaid (you know who you are). 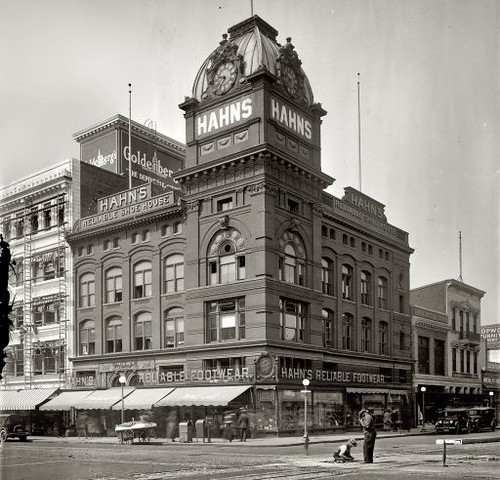 It’s sad that this building no longer exists. Look at that amazing clock at the top.